"To play a wrong note is insignificant;
to play without passion is inexcusable!"

Latin-American grooves, spiced up with punchy drums, crunchy, but not too heavy guitars, complex, but not too jazzy harmonies, all topped by a powerful and energetic voice. This is Maraquita, a Hungarian music project founded by singer/vocal coach Maria Szilágyi and pianist/songwriter/producer Adrian Fülöp. They currently have nine released songs, with several of them reaching #1 in the Latin-American Top40 of the world music platform EthnoCloud. The music video of their song “Me haces llorar”, a duet with Dominican singer Ruben La Voz is due to be released in the next months. All songs feature Spanish lyrics and are written and produced by Transylvanian-born Adrian, a polyglot, fluent in Hungarian, Romanian, English, German, Spanish and Italian. Maria, who learned from award-winning singers like Eszter Horváth (opera) and Attila Garay (jazz), and who has developed a unique vocal coaching methodology, is the voice and muse of the project. The couple has been living and making music together for almost two decades and are ready to bring the Hungarian Latin Experience to the wide audience. 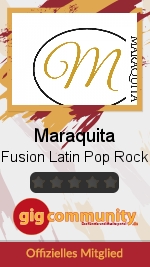